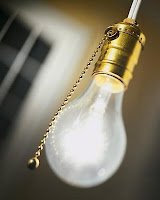 When I was teaching I spent a lot of times telling my students that this country is built on ideas. That ideas are everywhere. That their ideas had tremendous value. The problem is that we spend a lot of our time discounting our ideas. We tell ourselves that they will never come to pass. We'll remind ourselves that we don't have the money, talent, or other necessary resource. Here is a story that I used to tell my students.

When I was a teenager I had an idea to create a restaurant/arcade business. I even went through the process of writing a business plan and even tried to figure out how much money I would need. It was a skeleton idea but it was based on two of my loves, Video Games and Food. After doing all this work I told myself that this there was no way for me to find the money required. I wouldn't even be able to get in the door. I shelved it, literally put it on a shelf in my bedroom. Years later when I was in college I read an article about a business named Dave and Busters. In 1991 when I was working on this idea D&B was opening up in Houston, TX. When I was stopping becuase of my self-inflicted limitations they were getting it done. This has always been a reminder to me to explore every idea.

Another illustration I used was this website Million Dollar Homepage. Alex, the creator of the site, had an idea to sell advertising space on his site by pixel. He used the uniqueness of this approach and an incredible word of mouth campaign and turn it into a little more than one million dollars. Here is the first entry posted by Alex on this sites blog.

The Million Dollar Homepage is launched

So I had this little idea the other day. I was trying to think of interesting ways to make some cash before going to Uni (which is in about a month's time) and somehow this crazy thought entered my head: I'll try and make a million dollars, by selling 1,000,000 pixels, for $1 each.

And so 'The Million Dollar Homepage' is born...

I thought, this could be something crazy enough to work! Because I think people like crazy/quirky ideas. If this captures people's imaginations and people check out the site, then the pixels on the homepage will have value - and people will buy them (to display their ads etc). That's the theory anyway. The way I see it though: I've got nothing to lose by trying. And I'm sure it'll be fun.

So anyway, I've spent the last few days building the site, registering the domain name, and working out a plan. I love making plans. And here is the result.

So what does this mean for all of you? Are your capturing the ideas that you have and allowing them to grow? Or do you throw them away? Your Ideas Have Value.