Showing posts from March, 2009
Show all

March 30, 2009
"I know who is John Galt, " said the tramp. "It's a secret, but I know it."
"Who?" she asked without interest.
"An explorer," said the tramp. "The greatest explorer that ever lived. The man who found the fountain of youth."
"Give me another cup. Black," said the old bum, pushing his cup across the counter.
"John Galt spent years looking for it. He crossed oceans, and he crossed deserts, and he went down into forgotten mines, miles under the earth. But he found it on top of a mountain. It took him ten years to climb that mountain. It broke every bone in his body, it tore the skinn off his hands, it made him lose him home, his name, his love. But he climbed it. He found the fountain of youth, which he wanted to bring down to men. Only he never came back."
"Why didn't he?" she asked.
"Because he found that it couldn't be brought down." - Atlas Shrugged by Ayn RandSu…
Read more 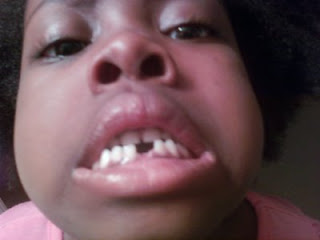 I did not smile while taking this picture.  1st Tooth Out.  Somebody contact the Tooth Fairy.
That is all I have for this Monday.  Things have been crazy and I didn't plan for this one.  I won't let the streak be broken.  Check out MckMama for all your Not me excitement.  Check out Momo's blog since she got me hooked on the Not Me Fun.
Read more

March 09, 2009
I did not have a very long list of Not Me Items only to have my computer crash eating my post.  I did not kick my desk knocking over a picture frame on it.I certainly did not try to recreate the magic of my last post and fail.I didn't write this list so as not to break my streak.Thanks to McMama for all the Not Me Hilarity.  Thanks to Momo for getting me hooked.  Thanks to Customer Support for getting my lappy back up and running. God's Man PS.  I am not asking all of my blog visitors to check out my church's fundraiser page.  We want to upgrade/replace our multimedia computers.  Please help us by donating or sharing our page (link) or both.  I will not be raffling off an iPod Touch if we meet our goal.
Read more

I was digging around on my computer and I found this.  I thought I would share it with you.  What do you think? ~~~~~~~~~~~~~~~~~~~~~~~~~~~~~~~~~~~~~~~~~~~~~~~~~~~~~~~~~~~A Vision Shared - July 11, 2008I was walking in a dark place when I heard God speak clearly to me saying, “Whom do you love?”I thought of my wife, who is the closest to me.Right before my eyes she appeared with a *Poof*.Next my children and god-children appeared.Then my parents and extended family walked into the room.With each face I felt so loved and secure.Next I thought of friends both near and far, Christian and not, close and distant.One by one they showed up and my smile grew larger.Next God asked me “What is important to you?”So I started to see visual representations of my desires.When I thought of my calling to preach a pulpit appeared.My mind went to providing for my family and I saw invitations to my children’s graduations and to their weddings.I saw a newspaper article announcing the Matthe…
Read more

March 02, 2009
Well it is early Monday morning and I can't sleep. That is probably because I haven't started my Not Me post for this week. So I better get it done so I can get to sleep. Check out MckMama the one who started it all and my friend Momo who got me hook on all this Not Me craziness. So here is a bunch of things that I didn't do
I did not get up and eat an entire section of graham crackers. I mean a guy training for a triathlon does not snack on sweets late at night.I did not laugh at my brides shocked expression when she walked into our dark living room and nearly tripped over our oldest, who was trying to avoid going to bed.I did not have a geek attack this week when my wife brought me Mango flavored Italian Ice.I certainly do not have mango-addiction. I can give them up any time.I did not research Mango butter only to find out it is like Cocoa butter and not Apple butter.I was not sad about the above revelation.I was not frustrated when I learned that the government was…
Read more
More posts