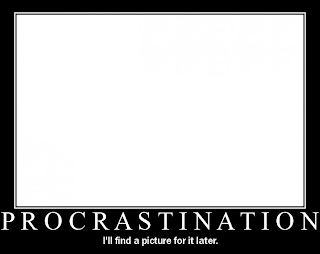 I have this as my computer's desktop wallpaper.

Your Future Self isn't any less likely to stop procrastinating than your Present Self.
Stop trusting the future. Do it now.

There is a very good reason why this is on my computer and in my face.  I'll get back to why in a minute.
I love words.  Especially older words that are not used as often.  When my wife and I were still dating she gave me the nickname Thesaurus Man.  Today in light of the reemergence of the word snookered, I have chosen to look at the word Sluggard.  The book of proverbs have several good descriptions of the Sluggard.  The Sluggard is someone who is lazy and does not prepare.

Go to the ant, you sluggard; consider its ways and be wise!
It has no commander, no overseer or ruler, yet it stores its provisions in summer and gathers its food at harvest.
How long will you lie there, you sluggard? When will you get up from your sleep?
A little sleep, a little slumber, a little folding of the hands to rest-
and poverty will come on you like a bandit and scarcity like an armed man. - Proverbs 6:6-12

The Sluggard is someone who thinks they are wise.  They puff themselves up.

The sluggard is wiser in his own eyes than seven men who answer discreetly. - Proverbs 26:16

The Sluggard lacks judgment, is filled with fear, and is destroyed by the combination of his desires with his laziness.

I went past the field of the sluggard, past the vineyard of the man who lacks judgment; thorns had come up everywhere, the ground was covered with weeds, and the stone wall was in ruins. - Proverbs 24:30-31
The way of the sluggard is blocked with thorns, but the path of the upright is a highway. - Proverbs 15:19
The sluggard says, "There is a lion outside!" or, "I will be murdered in the streets!" - Proverbs 22:13
The sluggard's craving will be the death of him, because his hands refuse to work. - Proverbs 21:25
The sluggard craves and gets nothing, but the desires of the diligent are fully satisfied. - Proverbs 13:4
The sluggard buries his hand in the dish; he will not even bring it back to his mouth! - Proverbs 19:24

The Sluggard tries in vain to get a return on his non-existent effort.

A sluggard does not plow in season; so at harvest time he looks but finds nothing. - Proverbs 20:4

What can we learn from the Sluggard?  What do you need to do today and are putting off?
p.s.  I am a recovering procrastinator.  I even put off telling you that until the end of this post.
- God's Man