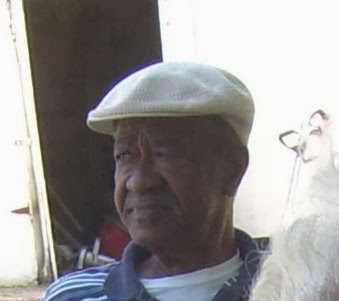 On September 17, 2006 my grandfather Carlton B. Matthews died. Thanks to everyone that prayed for us and for the many kind words. My grandmother asked me to speak at his funeral. I wasn't sure if I would be able to do it. I was very close to Pop-pop, especially in the last few years. I wish that I had a few more years with him. He was an awesome man but there was one thing that I almost never knew.


These were my remarks at his funeral.

Reflections of a Life Well Done…

I stood before the Father today surprised by what he said
“Well done”, he said, “Faithful one come in”
Before my enemies you never fled.

Here lies Carlton “Collie” Matthews, a son, father, grandfather, great-grandfather, a husband, a brother, a friend. No matter what you knew of Pop-pop, what you saw was what you got. I would often tell my friends about Pop but I could never capture everything that he was to me. I would tell them that he was a man from the “Old School.” There wasn’t a stronger man that I knew. He knew what he wanted to say and almost always said it.

Most of all pop-pop loved his grandchildren. Whether he said it or not, we knew it.
His actions spelled it out in letters to big to miss. I found that the best times that he and I spent were when we would sit together, neither of us saying a word. I felt so close to him. No matter how far away I was. Whenever I was in town I always made of point of spending some time with him. I talked about him fondly with my friends in Texas and California.

With Pop-pop there wasn’t a lot of smoke and mirrors. He gave me a glimpse into almost every area of his life as I grew up. Being in the military, being a business owner, being a man, he was very open with me. However there was one place that always remained a secret to me, his relationship with God. For a time this didn’t matter to me at all but as I got older this matter hung over me like a cloud. What does he believe? Why doesn’t he ever talk about it? Where will he go when he dies? I didn’t know and it scared me.

I remember when he had his heart surgery I said to myself, “Call Him. You need to talk to him about this.” I didn’t. When he had went back into the hospital later I thought, Call Him” but I didn’t. It ate at me and I couldn’t sleep for a while but on I went. The nagging pulled at me but I learned to ignore it. Before long, however, I could ignore it no longer. I had to find a way to tell pop-pop what it means to be saved. God opened a door and I was able to tell him what it meant.

I’m sure you are all wondering why I am telling you all this. I loved Pop-pop so much but I never knew the most important part of his life. Who do you love? If that person were to die tonight where would they go? Do you know? Do they know?

I’m not sure if you know about your loved one or not but I’ll tell you about Carlton “Collie” Matthews. My pop-pop knew the Lord. He and I talked on the Sunday that he died. My dad, my wife and I sat there as he told me that he knew the Lord and that he knew that he would go to heaven. He told me that the night before as he laid there in his hospital bed he called on the Lord. It was a beautiful conversation and I felt a tremendous weight lift off of me. In that moment we smiled at each other sat back and relaxed.

Remind your loved ones that God is just one call away. Tell them that He’s not looking for perfection, innocence, or purity. He’s only looking for your sincere call for Him to enter your life. If God can create an entire universe from a void how easy is it for Him to create what He wants out of your life?

“Be at rest once more, O my soul, for the LORD has been good to you.”


He never wasted a moment and I hope that I won't either.
God's Man

Hi All, I just got a new HTC Hero phone from Sprint. I must say that it has taken some getting used to. After a couple of days I am very pleased with it.
Read more

Here are some notes that I took while listening to a sermon on Biblical Manhood by Pastor Voddie Bauchman author of Family Driven Faith: Doing What It Takes to Raise Sons and Daughters Who Walk with God .  Share your thoughts in the comments below. Link to the sermon pt1 Link to the sermon pt2   Biblical Manhood by Pastor Voddie Bauchman We don't need more ball players.  We need Men with Trained Minds. We need Men with Godly Biblical Character We need Men with Multi-Generational Vision We need Men who commit themselves and all their faculties to Almighty God We need to Raise Warriors for Christ, not Entertainers. We measure men today by the 3 B's Ball Field Bedroom Billfold These are the three things that we need to see in Biblical Men God Honoring Labor No Lazy Men - It is my job to protect my daughter for worthless men.  "Do Not Abide a Lazy Man."  Don't get involved before your evaluate.   - What has more value, Lamborghini Testerosa or y
Read more

God's Man | Joy Is Free, But Not Cheap by Desiring God

December 11, 2014
Can twenty years of ever-sharpening focus, ten thousand resources, and the heart of Christian Hedonism be summed up in three minutes? With the help of gifted artists, we try in this video. It’s a celebration. It’s a thank you. It’s an explanation. It’s an invitation. I never thought of myself as a great narrator. But I do have great news. I hope you enjoy this overflow of joy from Desiring God. Gifts can be made at http://bit.ly/1yVPjAI. Voice: John Piper Written by: David Mathis, Marshall Segal and John Piper Production: Stefan Green Concept & Direction: Jorge R. Canedo Estrada Design: James Graves Animation: Phil Borst, Jorge R. Canedo Estrada & Seth Eckert Music: John Poon
Read more