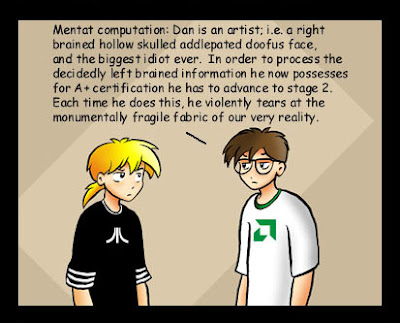 There has always been a distinction between people that are considered nerds and those that are called creatives.  Growing up they fell into 2 distinct camps, the artists and the geeks.  I fell squarely into the geek category.  Surrounded by books, taking apart radios and toys, even getting my first programming book at the age of 8.  Being a nerd/geek defined me and I was OK with that.  The artists were something that at the time seemed very alien to me.  That was until I actually experienced it.  Drawing, painting, sculpting, even sewing stopped being magic, became something tangible and I loved it.

I used to read a webcomic called the Life of Riley(above) back in the day.  In it they had a character that achieved superhuman cognitive and physical abilities by connecting hippy artist side with nerdy technical side.

"Creativity is just connecting things. When you ask creative people how they did something, they feel a little guilty because they didn't really do it, they just saw something. It seemed obvious to them after a while." ~ Steve Jobs

It was silly but it also struck a chord with me and as I read the quote above from Steve Jobs it made even more sense.  Creativity is just connecting things.  I would add that it connects things that were already connected.  We just couldn't see them at first glance.

So where is God in all of this talk of Nerds, Artists and Geeks?  The amazing thing about God is that He is the ultimate Creative hence him being the Creator.  He didn't just see the connections between things.  He designed them.  There is a purpose and a plan behind everything and when we, as created being tap into our creative ability and see those connections we are seeing his handiwork.  I have found that the more I dive into who God is the more that I want to create.  Whether it is poetry, cakes or computer code I want to do everything for His Glory.

What do you create?

Top 5 Recent Movies that Have Influenced Me Spiritually...

What is Playing in My Head Right Now...